Today aspiring filmmakers are graced with a choice of digital video and film cameras that, in some ways have made much easier for newcomers to shooting their film. The choice o digital cameras available have changed the film landscape considerably allowing all sorts of film to be produced with good enough quality in terms of image and audio regardless of budget. The digital age has contributed to speed up film production and post-production due to its image immediacy. With digital, you shoot and you have the image instantly, whereas with film there is the need to send to a lab to process the image, which in turn adds to the overall cost of the production. The point here is not to discuss which one is better, digital or film, but to acknowledge that for the independent filmmaker the digital age is causing a revolution.

But if the development of new digital cameras in recent years have presented us with different choices, it has also made more difficult to understand the different technical aspects and specifications.

This series of short articles and tutorials have the objective to help newcomers to have a better understanding of equipment and software available in today’s video and film market, and perhaps help you to decide which way you go according to your needs and budget. Far from pretending to be an ultimate guide, it sheds a bit of light on some subjects of interest for low budget filmmakers.

We start this series with an overview of image sensors, their differences, and characteristics.

Every digital video and digital film camera uses an image sensor to capture light and consequently turn into a processed final image that is recorded into a card (SSD, SD, Flash Card or external drive). Image Sensors can vary in size, resolution, and format. While in the early days of the digital cameras the frame format was the well-known standard definition, nowadays it’s common to most cameras to record high definition with a frame format of 16×9. High Definition cameras have been in the market now for a few years and their quality varies according to their processor and sensor capabilities, that is what determines how good is the final image output. But technology never stops and the latest development has brought us cameras with 2K and 4K formats.

High Definition cameras have been in the market now for a few years and their quality varies according to their processor and sensor capabilities, that is what determines how good is the final image output. But technology never stops and the latest development has brought us cameras with 2K, 4K and 8K formats.

In simple words, 4K means four times the size of high definition, that in turn brings unprecedented detail to the image in a more cinematic format and closer to what our eyes can perceive and see. Cinema cameras such as the RED EPIC, ARRI ALEXA, Canon C-500, Sony PMW-F55 and most recently the Sony Venice Cinema camera which carries a full frame sensor, are examples of digital cinema cameras development and can be found in use in all sorts of film productions, from Hollywood feature to independent and short films. And although the above-mentioned cameras are far from our reach due to their price, a new breed of cameras equipped with a super 35 sensor have been in the market for a few years now with new models continually coming up, such as Blackmagic Cinema Cameras, Canon C-200, Sony FS5 with its incredible design and electronic neutral density filter, Sony FS7 and others. They all record high-quality images in HD, 2K, 4k and raw. These cameras are well priced and extremely affordable if compared to the big boys such as Red Epic, Sony F55, and Arri Alexa. All those are dedicated cinema cameras and are designed only to shoot video/film.

Then there are the DSLR cameras, such as the classic full frame Canon 5DMKII, which paved the way for DSLRs filmmaking, followed by Canon 7D and others. Soon we had more companies coming into the game and we saw Panasonic bringing to light the Lumix range starting with Lumix GH1, that if wasn’t groundbreaking in terms of image quality, it was still a great tool in terms of features for independent filmmakers. From the Lumix GH1 Panasonic stepped up to the GH2, which could be hacked to an extent to achieve great image quality. The GH2 was and still is favored amongst a great number of low budget filmmakers. The Lumix GH3 superseded the GH2 with better bitrate without the need to hack the firmware. All the DSLRs and DSLM cameras mentioned above record HD 1080p or 1080i using Flashcards or SD cards. Compared to mini DV cameras the DSLRs were a breath of fresh air allowing filmmakers to make use of different focal length lenses, which consequently allowed for more control over depth of field. And as if it was not enough Panasonic has just stepped up again and launched the Lumix GH5, an amazing DSLM camera packed with professional features and a great codec. In fact, the camera market has never been so good with great DSLR cameras available from all big companies such as the Sony A7 series of full-frame cameras and also Nikon and Canon cameras.

So what’s the difference between the cameras mentioned above in terms of sensor size and its implications? While the RED, ARRI Alexa, Sony F55 Cinema Camera and Sony F5 use a Super 35mm sensor, the Panasonic Lumix GH5 uses an MFT sensor to capture video in 4K, the Canon 7D uses an APS-C sensor and Sony A7SII and Nikon D850 have a full frame sensor. Most recently Sony has launched the Venice cinema camera with a full frame sensor, the first full frame cinema camera.

Below is a comparative chart that shows the different sensors sizes and crop factor. 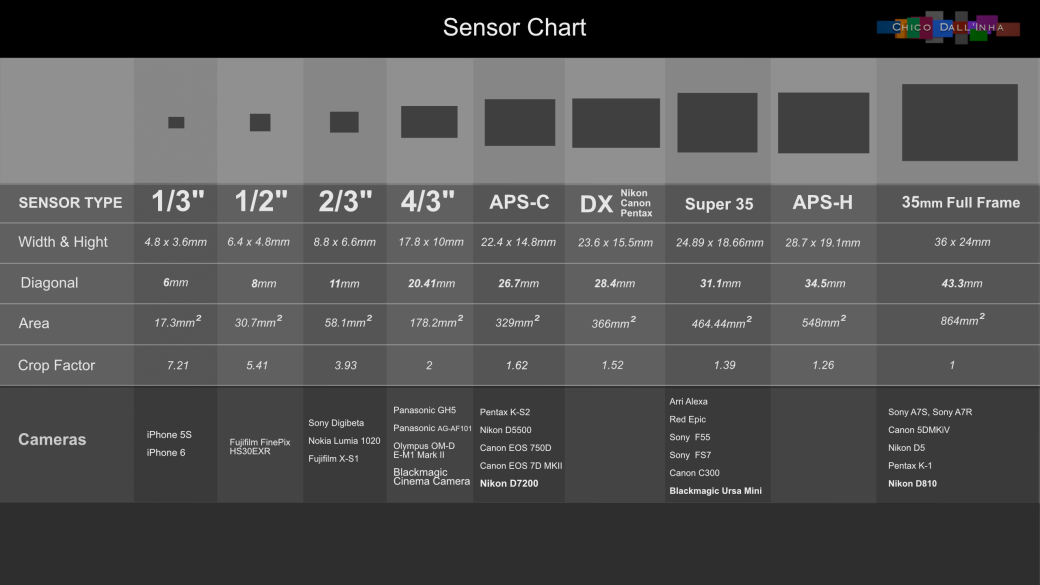 Larger sensors capture more light than smaller sensors.  As an analogy, think of a large and a small window. The same size room with a large window will receive more light and consequently be brighter than a smaller window. The same rule applies for image sensors. A Super 35mm sensor receives less light than a Full Frame sensor. Larger sensors also allow for a shallower depth of field, i.e. when we want to separate our main subject (actor/actress) from a distracting background. On the other hand, a smaller sensor can provide a wider depth of field than larger sensors. Focus on large sensor tends to be more critical and less forgiven than with smaller sensors, this is true especially with 4K cameras. Hence the need of a focus puller for cinema and DSLR cameras.

Another factor that contributes for more light in a sensor is pixel size. The bigger the pixel the more light it absorbs making for a better image. A large sensor with a high pixel count tends to produce more noise than the same sensor with less but bigger pixels. That is the case with new Sony Alpha A7SII, a full frame DSLR camera that can record 4K. The Sony A7SII has a full frame CMOS sensor with 12MP.

DSLRs Camera with large sensor tends to be heavier and bulkier than it’s smaller siblings. Panasonic Lumix GH5 and Olympus OM-D EM-1 are small and take smaller lenses than the Canon, Nikon and some other DSLRs. For an independent filmmaker, this might weight on the final decision depending on someone’s style of shooting and location.

The zoom-in effect (Image Crop) happens when a 35mm SLR lens with a specific focal length is used on a camera with a smaller sensor. If we use a 35mm DSLR lens with a 50mm focal length on MFT camera, that lens will become the equivalent of a 100mm lens. It is appropriate to say that the maximum aperture of the lens remains the same but less light will reach the sensor due to its smaller size. Whereas the same lens used on full frame camera will remain a 50mm lens.

Chico Dall’Inha is a filmmaker, director, and editor. His most recent film AKONG: A Remarkable Life has been released in March 2017 and is currently being screened in many places around the world. Chico is also an Associate Lecturer at the Goldsmiths University of London.